A forum in which to discuss topics specific to the assembly of the RV 10.
Post Reply
38 posts

I thought I would move these out of the "Whatcha Doing" thread to the RV-10 forum.

The paint process has finally started to pick back up now that my painter is over his kidney stones.

We got the Metallic Phantom Gray, Metallic Silver, and the clear coat on the fuselage this weekend. Wil be starting to tape for the red stripe and the N#'s tonight. The goal is to have the fuselage done by Thanksgiving.

Unfortunately, my camera doesn't have enough of a wide angle lens to get a decent photo from inside the paint booth. 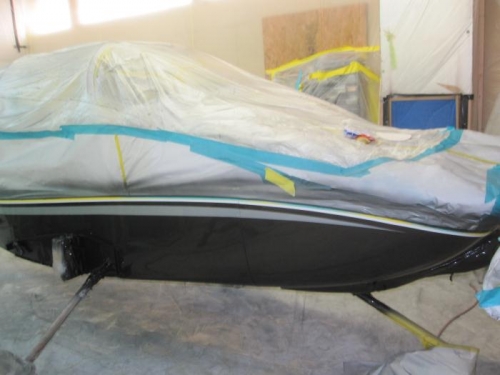 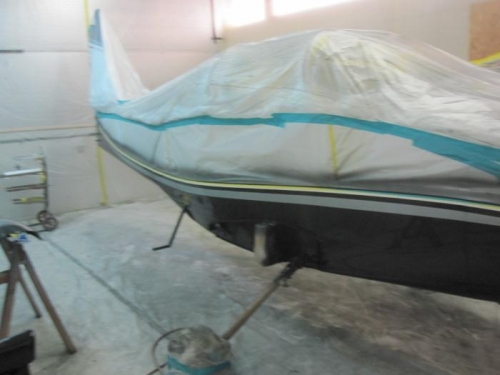 ...and I am glad your painter is through with his stones. That sounds incredibly painful!

This is going to be beautiful! Keep them coming.

Another minor delay. We were apply the paint masks and my wife noticed that the right side was N410BL (correct) and the left was N401BL (not correct). So were are waiting for the new mask to show up. Hopefully, we'll get the final paint sessions done this weekend.

The following photos show the right side with the N# mask and the stripe taped and ready for the Metallic Red Paint. 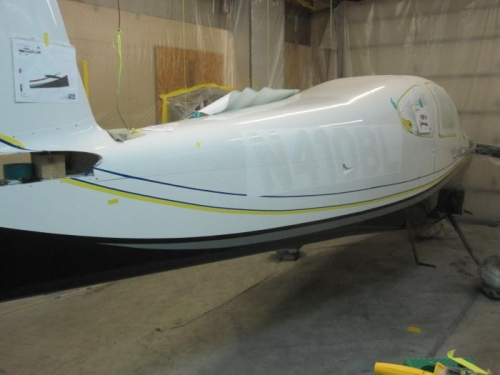 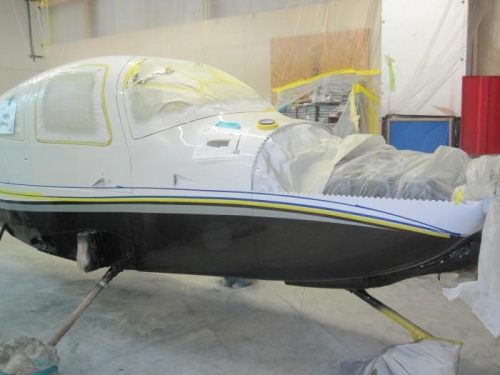 Janice and I stopped by the painters last night. It's just about done. The painter still has a few touch ups to do, so all the paper and tape haven't been removed yet. It's scheduled to head back to the hangar on Saturday. 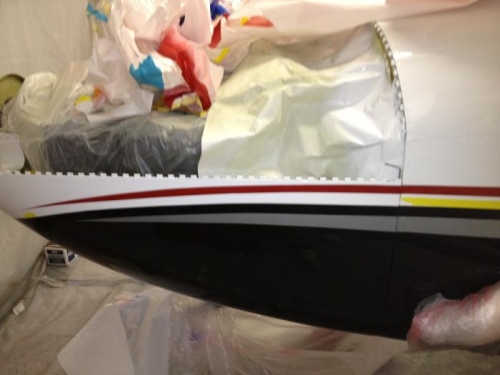 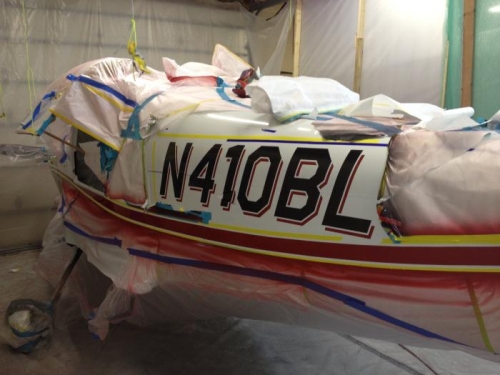 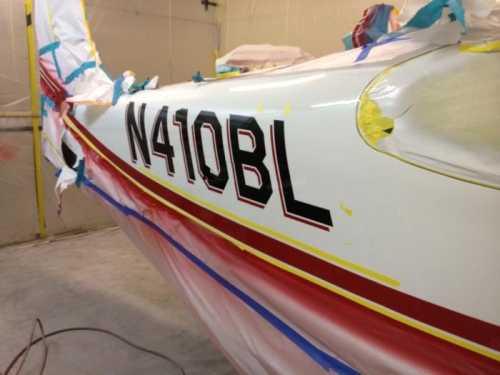 That is stunning!! Can't wait to see the final product!!

This is looking great Bob!!!

Picked up the fuselage from the painter this morning, then watched OSU beat Michigan. What a great way to spend a Saturday! 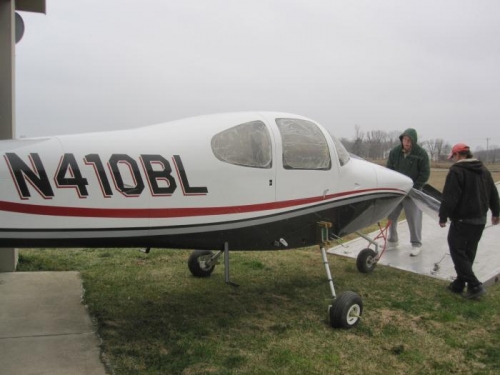 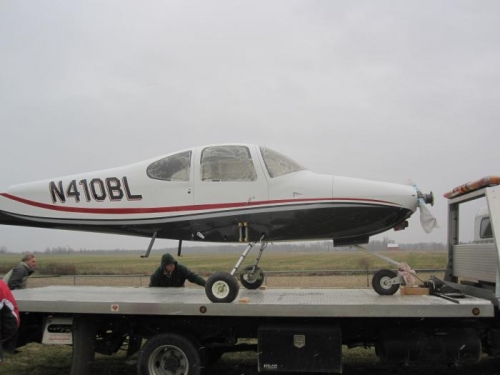 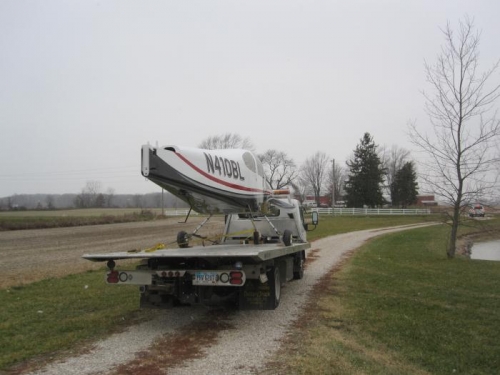 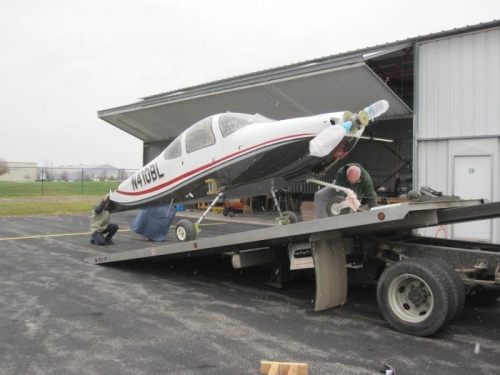 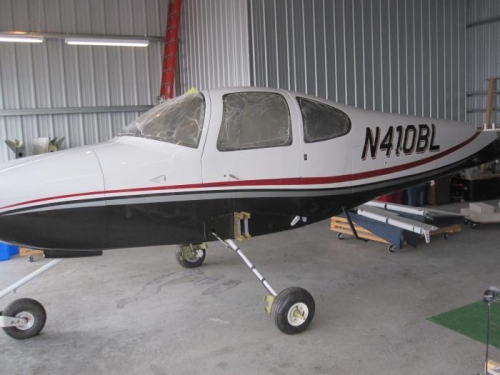 Me too! Unfortunately, I found out this past week I tore my Achilles' tendon. I'm hoping I can get final assembly before surgery, but first flight will have to wait for a couple months.

Bob, my gf is guessing that you were playing hockey. She has many patients that tear those and they actually come in wearing their hockey gear.

Would you like me to fly out there in the six and do the first flight for you?

captain_john wrote:Bob, my gf is guessing that you were playing hockey. She has many patients that tear those and they actually come in wearing their hockey gear CJ

Nothing so glamorous. Long term inflammation from a bone spur. The only sport activity I've been in the last couple of years has a been a sanding competition with my wife on all the fairings.

I played with delaying my surgery until the first of the year, but after wearing that boot for a couple days, the thought of an additional six weeks of wearing the boot went out the window pretty quick. The first flight will just have to wait.

The surgery has passed and went well. I'm now officially a "gimp" for the next 4-6 weeks.

The night before surgery, Janice and I were at the paint shop taping the striping for the right wing. The end result looked like a mess, but was functional. 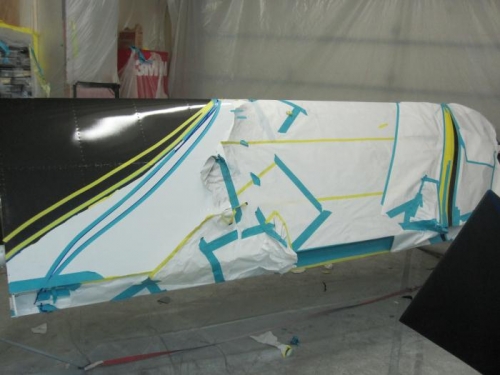 While I was laid up, Todd painted the striping. 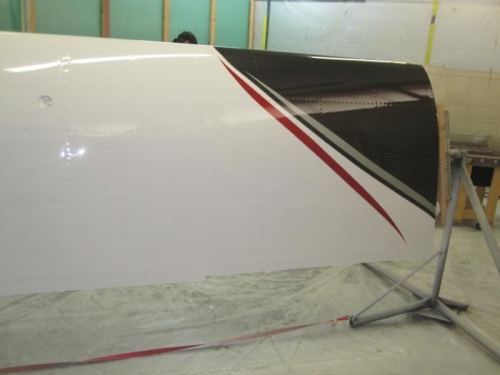 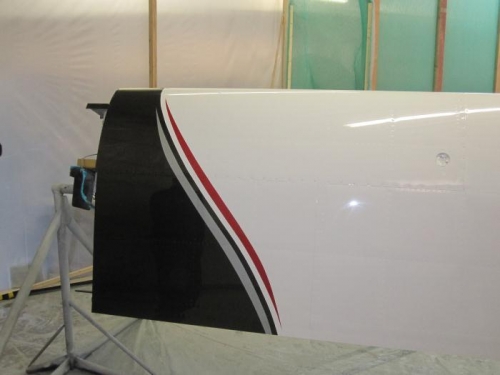 Since I have only one useful leg at the moment, I had to depend on a couple fellow RV'ers (Dana Saucier and Phil Newlon) to assist swapping the right wing back to the wing stand and putting the left wing in the rotissorie.

Todd also fixed a problem with the red striping on the vertical and rudder, so Janice and took them back to the hangar. 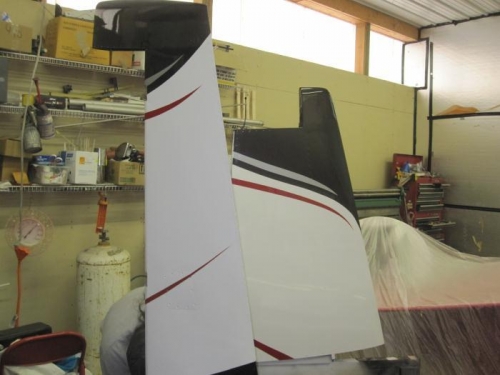 The left wing should be done before the end of the year. Since I'm some what limited as to what I can do for the next few weeks, Todd can spend a little more time with his family for the holidays. The wheel pants will be done in early January, but I'm not in any rush for them. I don't plan to install until well into Phase I.

That is getting quite purdy.

It's been awhile since my last post. I've found that I'm pretty useless in the hangar with this cast on. The good news is that it's scheduled to come off on Thursday. I'll still be in a boot for awhile, but at least I won't need crutches anymore.

We brought back the wings from the paint shop today. The only thing left to be painted are the wheel pants, which I won't really need for awhile. 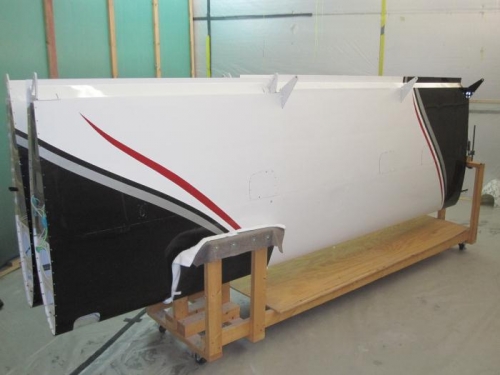 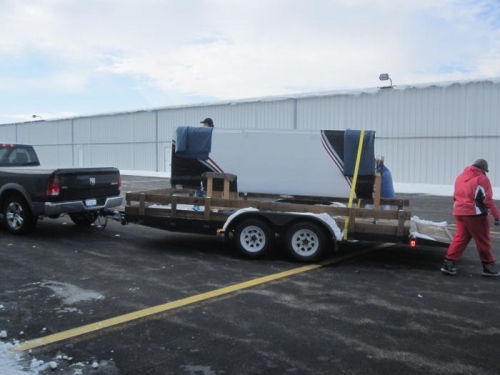 Looking good Bob. Enjoy the final assembly, I found it to be a real treat seeing it come together all painted
Brian
Townsend, MT
Top

This is going to be a stunning plane when it is finished.

We installed the wings for the last time. I had plenty of help, which was a good thing because of my foot and back, I wasn't of much help. 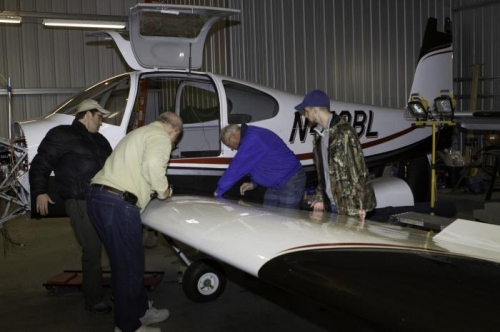 Wow, that is totally sweet! Can't wait for the final photos of this thing when its 'done'. Keep it coming!